In 1937 Archbishop Rudolph Aloysius Gerken of the Archdiocese of Santa Fe, the Sisters of Charity of Cincinnati, and a group of volunteers realized their dream of serving the basic healthcare needs of the less fortunate by founding a clinic in Santa Fe.  First known as the Catholic Clinic, its mission was to serve primarily children of low-income families.  Along with generous volunteer physicians, the first staff at the clinic included Sisters of Charity, Sr. Mary Isadore Linden and Sr. Francis Loretto Lopez.

In 1952 Archbishop Edwin Vincent Byrne placed Catholic Clinic under the patronage of St. Therese of Lisieux and the clinic became known as Villa Therese Catholic Clinic.  he Sisters of Charity of Cincinnati would direct the clinic at several intervals over the years.  In addition, the Medical Mission Sisters and the Handmaids of the Precious Blood of Jemez Springs would also share in this work.

Villa Therese has worked to deliver compassionate and quality healthcare to underserved and insured families in Santa Fe and the surrounding areas in Northern New Mexico.  Villa Therese is the only free clinic in New Mexico.

As health services and technology have changed over the years, Villa Therese has worked to upgrade our capability while keeping our focus on providing basic, core care of sick and well children constant.  Villa Therese Catholic Clinic has always relied upon the generosity of local volunteer health care professionals and other non-medical volunteers as well.

Villa Therese just. completed a move from our original facility behind the Cathedral Basilica of Saint Francis of Assis to a newly constructed clinic in the Hopewell-Mann Street Housing division.  The clinic has expanded from one exam room to seven modern exam rooms, a waiting area, reception and plenty of parking. 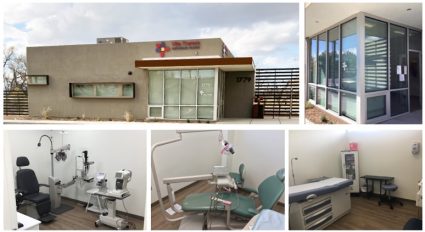